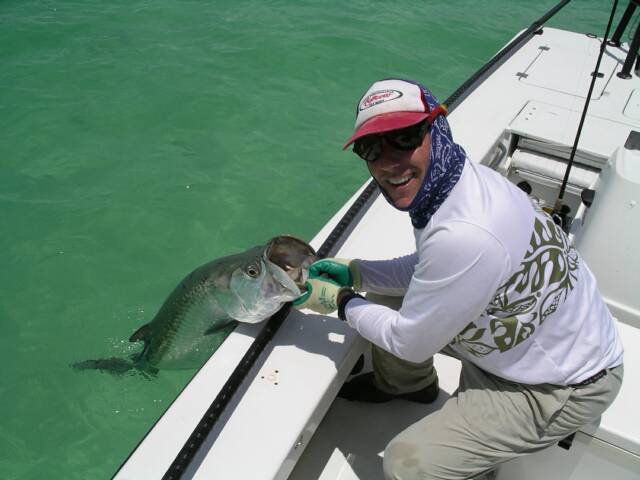 Since its tarpon season in the Fl Keys I thought I’d share w you some insider information regarding migratory “Atlantic side” flats fishing for the silver king. Down in Key West we happen to be blessed w some of the most expansive and productive oceanside flats you would ever want to encounter! Extending west some 23 miles from Key West to the Marquesas these bright, marled, firm bottomed flats are teeming w fish of all makes and models! This is where I consider my home away from home during tarpon season. Some people guffaw(even some guides I know)at the idea of spending one’s day fishing for migrating oceanside tarpon, opting for laid up or cruising fish over turtle grass, admittedly an easier means of duping Megalops!

Why are tarpon supposedly so much harder to catch over bright sandy bottom you ask? The answer is: they are and they’re not. Let’s tackle the “they are” part first. Any fish whether its a striped bass, bonefish, tarpon etc…. that is left out in the open is EXPOSED! Without any cover ie. a dark covered grassy bottom, or a deep channel bordering a shallow flat, these fish feel naked and are on HIGH ALERT!! There is good reason for this as there are BIG, TOOTHY PREDATORS in these environs that would think nothing of cutting an 80 lb tarpon in half just for the fun of it! Not many people know this but there is an actual migration of sharks specifically hammerhead and bull sharks which follow that of the tarpon migration. Over the last 10 years of my guiding career I’ve had several encounters with sharks that have made easy meals out of tarpon that were being “played out” by my clients with the long rod.

Aside from the very real threat of predation, tarpon have HUGE EYES, the better to see you with! We’re talking the size of a quarter! Add gin clear water and that beautiful, bright sandy bottom and you’ve got quite a dilemma on your hands!

The “HD Flip” footage you are about to see will pretty much elucidate what I’ve just written about(minus the big toothy predator part). These fish are indeed catchable however as any fisherman knows even the best laid plans can and will go awry……….

PS: My next installment ends on a happier note! I’ll also discuss some strategies that have worked for me w regards to actually hooking these oceanside swimmers.